Electoral College: …but WHY? 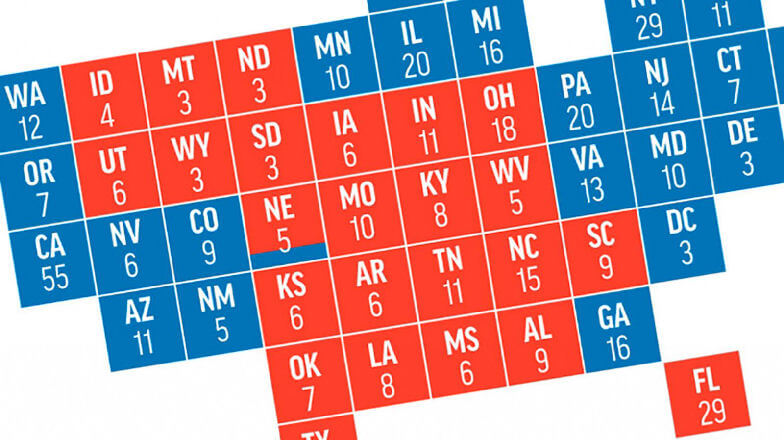 The Electoral College is without doubt one of the most peculiar institutions in U.S. politics. Most American school children are taught the basics of how it serves to “elect” the President, but perhaps a more relevant question today is: Why do we still employ such an arcane mechanism for such an important purpose?

The founders were up against an array of challenges as they created a new nation. They were motivated to install systems to prevent a return to the despotism they’d just shaken off with a costly war. And while they recognized the need for the efficiency of a solitary executive (accountable to a legislature and the judiciary), they also worried that the power vested in an individual would inevitably lead to abuse.

You may already know that the Constitution stipulates that if no one candidate receives a majority of the votes in the Electoral College, the decision is made by the House (cf. John Quincy Adams in 1825) where each state gets one vote. You may also recall that in the Bush-Gore election of 2000, the Supreme Court awarded the election to George W. Bush, overriding that provision of the Constitution. This is because the framers were working under a few assumptions, one of which was that they presumed that eventually, presidents would not be decided by the Electoral College or even the voters, but by the House of Representatives.

After months of debate, the “solution” of the day was compromise. The framers couldn’t agree on whether the president should be elected by popular vote or by Congress, so they crafted a hybrid solution that was only grudgingly accepted by both camps. But nobody thought it was a good idea at the time. They called it the Electoral College.

After forging this unsteady agreement, it remained to be determined who would be counted as a “person” in this fledgling and innovative democracy. This is where the spectre of American slavery rears its ugly head. The founders realized that there was strength in unity, but how were they to achieve that?

The slave states were generally less populous than the northern industrial states. So while they wanted to deny slaves the right to vote (along with everything else), they wanted to count those slaves as citizens in order to bolster their political influence at the national level.

This led to the infamous second great compromise: for the purposes of allocating representatives and electors, enslaved Blacks would be counted as three-fifths of a person.

It didn’t take long for those 18th century assumptions to be proven wrong, or more to the point, circumvented.

Despite noble claims of respect for democratic principles, the temptation to manipulate for parochial gain was powerful. The slave states, in particular, recognized that even when “the people” were limited to white male landowners, their interests had little chance of success on a national level. Consequently, people with common goals quickly gathered into the special interest groups we now call political parties.

What was unanticipated by the founders was the power that political parties would soon wield. With respect to the Electoral College, the parties soon realized that the Constitution provided for the states to allocate electors as they saw fit. This meant that at the state level, they could establish the current “winner take all” method in which all the electoral votes of a state go to the popular vote winner in that state. This is contrary to the original intent, and manifestly undemocratic, but that’s exactly the point: when there’s enough at stake (like the presidency), people will find ways to game the system in their favor.

The word “compromise” can mean an agreement between differing parties, but it can also mean a debasement of principles. In the case of the Electoral College, we have inherited both. In order to preserve the Union, the founders compromised with slaveholders to unite against external enemies. In later years, the imperfect mechanism they created was cynically exploited to assure that certain constituencies had outsized influence in national politics. It’s worth noting that Donald Trump favored abolishing the Electoral College, but changed his mind when it delivered him the presidency despite receiving far fewer votes than his opponent.

Indisputably, there are individuals and factions that benefit from the current system. But no reasonable person can make a persuasive case that it’s a good thing to grant disproportionate political influence to some segments of our society based on arbitrary criteria, however “traditional” that may be.

Today, we have a more enlightened view of how a nation can be governed. We no longer tolerate the possession of human beings as property. We no longer consider race or gender to be qualifiers for participation in our political process. We have evolved, politically, to be more democratic, inclusive and fair. But we’re not done yet.

It’s time to recognize that tradition alone is a poor justification for perpetuating unjust election mechanisms. It’s time to cast aside expedient compromises whose purpose was always considered to be a temporary solution. It’s time to make the necessary changes to evolve into the principled, democratic nation we’re capable of becoming. It’s time to eliminate the Electoral College.

Bill Campbell has been active in Represent.Us since 2019. He is a veteran of the U.S. Marines and a graduate of the U.S. Naval Academy. His primary motivation for supporting Represent.Us is helping to fix the pervasive corruption in our government, especially at the federal level.
View all posts
Tags:anti-corruptiondemocracy reformgrassroots activismpolitical reform

1 thought on “Electoral College: …but WHY?”