Unrig: How to Fix Our Broken Democracy 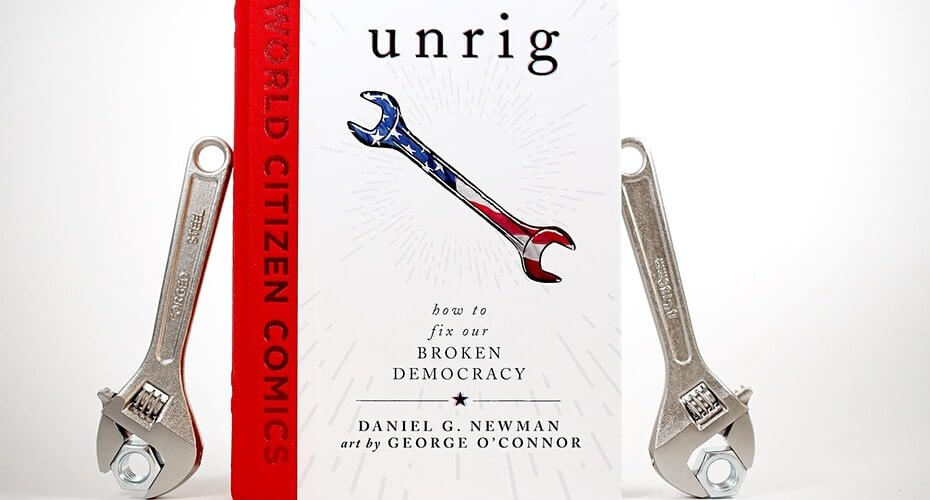 It’s not often that a serious book about politics is written as a graphic novel, but that is what author and activist Daniel G. Newman has done with Unrig: How to Fix Our Broken Democracy.

“I wanted to write a book that I would actually want to read myself,” Newman explains, unlike the lengthy tomes that describe problems in great detail, but offer little in the way of solutions.

Working with George O’Connor, an accomplished illustrator with numerous books of his own, Newman produced a political book for the rest of us, one that recounts the battles waged by defenders of democracy across the country, including his own Berkeley activism and that of democracy activists in Seattle.

Newman presented excerpts from his book to Represent San Diego on Thursday September 10, offering a message of hope to an online audience of activists and others concerned about our democracy. He described large-scale social change as a process of many small-scale changes occurring in disparate places often by people unknown to each other.

Money in politics is the single most significant reform issue to address, Newman said, while acknowledging that no single political reform will cure all ills. What we have now is, “government by and for the corporations and billionaires,” and that must change if we are to have a functioning democracy.

Contributing to this situation is the long-ongoing efforts of a cabal of billionaires to literally stifle democracy and negate the will of the electorate. Citing the Koch Brothers and economist James M. Buchanan, Newman details the steps taken by these billionaires to totally eliminate the structure of government as we know it.

Using his book’s dialogue and illustrations, the author described how community activists in Seattle and Berkeley were able to enact legislation that made it easier for low income people to contribute financially to political candidates. Democracy Vouchers — which gave each Seattle voter $100 to contribute to candidates of their choice — and a matching contribution system in Berkeley that multiplied the influence of small donors, both passed by wide margins after initial attempts had failed.

Persistence and organization are the keys to success, the author said, adding that it’s possible to “move mountains with just a handful of people. How many did it take to unrig elections in Seattle? Just ten.”

When defeat is encountered, Newman said, as it initially was in Berkeley and Seattle, it’s necessary to take a long-range perspective.

“If a program doesn’t pass the first time, what’s the next step to make sure it does in the future? It’s important to make a commitment to the larger process, because a campaign is just one piece [of that process].”