Perspectives on the Recall Election 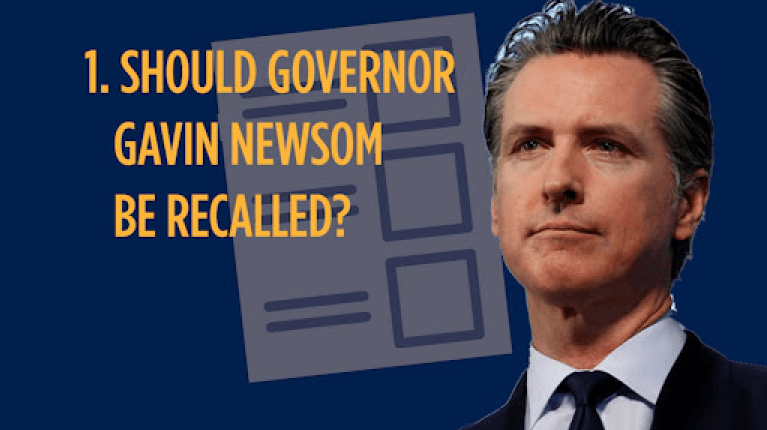 Perspectives differ on the upcoming recall election of Governor Newsom. Here are two different opinions for you to consider as you decide how to vote.

Is the California Recall a Partisan Ploy?

It’s easy to empathize with Republicans living in California. For a long time, the state has been dominated by the Democratic Party, and Democrats are quite willing to exercise their influence in self-serving ways. No doubt California Republicans feel as though they cannot get a fair shake or even be heard. Unfortunately, this frustration seems to have led some to desperation when it comes to the upcoming recall election for Governor Gavin Newsom.

Most of us were taught that the “founding fathers” of the United States were concerned about a tyranny of the majority and included provisions in the Constitution to preserve the rights of minority groups (even if that concern didn’t extend to anyone who wasn’t a white male Christian landowner). Unfortunately, those mechanisms have, over the course of our history, been subject to the same political pressures that have affected all our laws.

Since the late 19th century, the American political landscape has been dominated by only two political parties, and both of those parties have become increasingly focused not on presenting their particular view for the future direction of the nation, but on preserving and consolidating power wherever they can, and usurping power through undemocratic means when in the minority. Institutions such as bicameral legislatures and the electoral college may have been created in good faith at the time, but all of these have degenerated into vehicles for imposing minority will on the majority. The same is true of the recall.

Our federal laws require that officials be removed for cause by impeachment. But no such due process is in play in California. While it’s easy to understand the impulse to create mechanisms to remove manifestly malignant officeholders, it’s hard to understand how California ended up with the method for doing so that we see today. The specifics of the California recall involve a two-step process: first, voters must decide whether or not to recall the official. If that measure passes, voters must select a replacement.

Preposterously, our plurality voting system means that an official with 49% support can be replaced by someone with a tiny fraction of the vote. Relying on voter sentiment instead of due process can put our democratic processes at risk. The successful recall of Governor Gray Davis in 2003 was later exposed as a fraud perpetrated by the executives of Enron Corporation. The specific numbers of that election put Arnold Schwarzenegger in office with 48.6% of the vote to Davis’ 44.6%, but the vote was clearly tainted by Enron’s manipulation of the California power grid, which turned public sentiment against Davis. Regardless of how one may feel about Davis vs. Schwarzenegger, elections driven by fraud are hardly supportive of a just society.

In the upcoming recall, there are so many candidates on the ballot that it is possible for one to become the new governor with even less than 20% of the vote. Disappointingly, there are people working diligently to elect a Republican supported by a small minority of voters to replace a Democrat with the support of 50% of the electorate. How could any reasonable person characterize such efforts as anything but blatantly partisan?

The current governor, like any official, has made mistakes large and small. But that’s not what the recall is about. The recall petition was written before the beginning of the pandemic. Take all the time you need with that, as you consider the justifications for recall offered by Governor Newsom’s opponents. The effort was initiated by a few disgruntled activists and only gained traction after the pandemic threw our society into chaos.

Finally, let’s consider what the potential outcome of this recall could be. The Republican front-runner is a radio talk show host, while the Democrat is a YouTube personality. Is either of these really qualified to lead the world’s fifth-largest economy? If either of them are “elected” in the recall, it will be with a small minority of the vote. So let’s not kid ourselves. The recall effort is hardly an expression of good faith concern over the management of our state. To the contrary, it is partisan trickery and an affront to American values.

Why to Vote NO in the September 14 Recall Election

Californians will go to the polls on September 14th (or earlier if they’ve voted by mail) to decide the fate of Governor Gavin Newsom. That we’re going to the polls in an off-year election three years into a governor’s four-year term is bad enough, but both the cost and the outcome could dramatically change California’s future.

First, let’s talk about the cost, which is estimated to be $277 million according to the State Finance Department. To get perspective on just how much money that is, you could give each of the state’s 58 counties $4.6 million dollars and still have $200,000 left over. Imagine what each county could do with an extra $4.6 million…. Teachers wouldn’t have to buy their own school supplies. Cities could put more cops on the streets, provide rural areas with better broadband, hire more firefighters to be at the ready whenever fires break out. The list is truly endless. Unfortunately, instead, we must waste $277 million on a partisan progress report. So how did we get here?

A few partisan activists decided they were going to gather signatures to recall Governor Newsom the day after he took office, back before anybody even knew what a novel coronavirus was. Then came COVID-19, and Newsom issued a partial lockdown in November 2020. Three days after being elected, and after implementing said partial lockdown, Newsom made a potentially career-ending mistake. He went to dinner…indoors…at a French restaurant…to celebrate the birthday of a friend…who was a lobbyist. See how the story just keeps getting progressively worse?

This became an enormous scandal, and had the effect of pouring gasoline on the efforts of a few lowly recall activists who wanted to recall Newsom. Suddenly the number of signatures on the petition jumped exponentially, no doubt in large part due to the Republican Party jumping into the fray to help with the recall petition efforts. It took Governor Newsom a whole week to admit this dinner decision was “a bad mistake” and to apologize, but the damage was done. The fuse had already been lit on the recall campaign.

So here we are. What happens if Governor Newsom is indeed recalled? Any of the scenarios below could play out.

The Republican frontrunner has been quoted as saying that he’d repeal the state’s vaccine and mask mandates. Florida, which doesn’t have mask mandates in schools, leads the nation in child hospitalizations from COVID-19. According to the Tampa Bay Times, adjusted for population, that’s 0.76 kids hospitalized per 100,000 residents, or an average of 1,540 new cases per day for that specific reporting period, the highest rate in the country — and that was before kids returned to school!

We can’t say how many children have died because Florida stopped reporting deaths by age group to the CDC on July 17. According to a Los Angeles Times article published around the same time, child COVID-19 hospital rates are lower in California than the US average. Thus, there is a legitimate fear that with no vaccine or mask mandate, the Golden State could go the way of the Sunshine State.

Then there are the potential political ramifications. Signatures from only 7% of adult California voters were required to certify this recall election, and the leader of the world’s fifth largest economy could be elected by a similarly small percentage if Governor Newsom does not get a majority of votes. (For more on the recall itself, see Bill Campbell’s article.)

While no one can predict whether a Republican or Democrat will win a plurality, we can be sure that should a Republican win, it will change the balance of power in the D.C. Senate with the appointment of a conservative to replace 88-year-old Senator Diane Feinstein should she die in office before her term ends in 2025.

In addition, the ramifications on a statewide level might also be severe. With respect to issues like climate change, education and workplace protections for women, we could elect a governor with very different attitudes than those held by most Californians. If a Democrat should win, we have no way to predict the consequences of electing a political neophyte with no previous government experience. However, if past federal experience has taught us anything, the results most likely won’t be favorable.

If any of this worries you, there is a very simple solution: Vote NO in the September 14 recall election.

Bill Campbell has been active in Represent.Us since 2019. He is a veteran of the U.S. Marines and a graduate of the U.S. Naval Academy. His primary motivation for supporting Represent.Us is helping to fix the pervasive corruption in our government, especially at the federal level. Gil Sery is the webmaster of the Represent San Diego website. He is a proud Independent politically and has been working with Represent San Diego for many months.
View all posts
Tags:election 2021grassroots activismpolitical reform