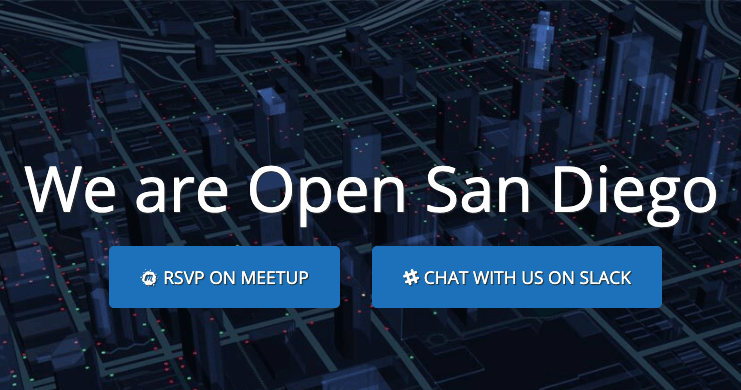 Open San Diego is a volunteer organization that helps local government and community groups use technology to solve problems. The ten-year-old group is one of over eighty chapters, called brigades, of Code for America, a national organization that shares the same mission on a state and national level.

We met with steering committee members Nikolaj Baer and Mike Morgan to discuss Open San Diego’s mission and how local organizations can pursue projects they know would make a big impact on our community, but for which they lack their own knowledge or resources.

RSD: What are your roles in Open San Diego?

Nikolaj: Mike and I are co-captains now. We both stepped up into a leadership role after the previous person stepped down, Tommy Stone. He did a great job leading the Voters’ Voice project over the last two years or so. I’ve been with Open San Diego for three years now.

Mike: I’ve been with Open San Diego just over a year.

RSD: What motivates you to volunteer with Open San Diego?

Nikolaj: I’ve always had political interests, and what I liked about Open San Diego, one was the opportunity to interact with government tech with some authority, and you have an opportunity to work on projects and deal with real things, but without going through government channels and the bureaucracy. Another thing I like is that it is non-partisan. Open San Diego leans more toward the side that’s aligned with facts and evidence. We’re just trying to make government more effective, improving the output of the government.

Mike: I’m interested in the open data movement; there’s a lot of government open data. Most major cities at all kinds of levels publish data.

RSD: What kind of roles do volunteers fulfill?

Nikolaj: There’s project leads, someone who owns a project and drives it forward. Most projects have some technical people. We have a couple of designers and we have built a relationship with the UX Speakeasy, which is a local group. There’s a couple of people who are project managers who’ve done a pretty good job.

RSD: What challenges do you face as an all-volunteer organization?

Nikolaj: The challenge of volunteer projects is that people come and they will leave. Very few of them stand the test of time—that’s just how it is, so you have to have a project lead.

RSD: How do organizations propose projects?

Nilojaj: To pitch a project, go to the Slack channel to make connections. We can help them refine their pitch and figure out what is reasonable to ask of people to make a greater chance for success. If it’s loose in definition and has no real timeline, no one is going to want to do it. If it’s tight and specific and has some real direction, there’s a good chance it triggers something they want to work on, that they find interesting.

Mike: Come to a meeting, suggest it and then communicate on the general channel over on Slack and then go from there.

Nikolaj: If you’re going to run a project, you’re going to have to break out some bite-sized tasks right off the bat. Here’s ten tasks that are easy tasks that I can do in ten minutes, but that I want other people to do so they can get engaged. Having some real simple tasks and making them as bite-sized as possible and putting in some extra effort, that will get your project going.

RSD: How do people get involved?

Nikolaj: We have a Meetup page and a Discord channel. We have an ongoing Slack channel. You can just hop on and say I’m so and so and I’m interested in blah-blah-blah. The real thing is to use Discord to hop on at 7:00 PM on a Tuesday [for the weekly meeting] and chat with people. There’s an ice breaker and it’s very conversational. At that point, we break out into different groups.