How Corporate Money Hurts Our Democracy 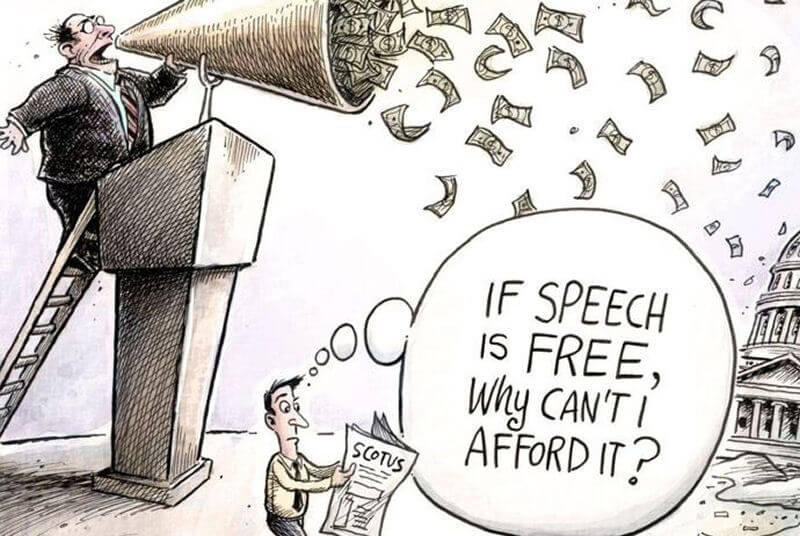 Every major issue America faces today—from climate change and healthcare to income inequality and student loan debt—can be traced at least in part to government policies that prioritize corporate profit over public good. Since our current political system allows corporations to spend unlimited amounts of corporate money, they wield far greater influence over public policy than do individual voters or even groups of voters. This situation directly contradicts the fundamental idea that in a democracy each voter has an equal voice.

Corporations have been granted the right to spend corporate money on political campaigns because of “corporate personhood,” a long-established judicial and constitutional concept that grants them the same (and in some cases more) rights as people. This, and the fact that money, especially corporate money, is equated with protected speech, has enabled corporations to spend unlimited funds in support of the candidates and policies they favor. The 2010 Citizens United Supreme Court decision only made the situation worse by granting corporations the freedom to make unlimited so-called “independent” expenditures—spending intended to influence campaigns but, technically, not in coordination with a campaign.

One problem that results from this situation is that corporations can spend resources from stakeholders who do not support its political agenda. Indeed, that agenda may not even be disclosed to stakeholders. For example, a person might invest in a company because they like their product, but may not want the company to lobby the government to allow them to pollute waterways or suppress the minimum wage.

Also, because of weak corporate transparency laws, the public has no idea who in a corporation is responsible for making decisions on political spending. Thus, the person directing funds need not be a U.S. citizen, and if the corporation is a U.S. subsidiary of a foreign company, there is no way to ensure that the decision makers are not working at odds with U.S. interests.

Countries that see themselves as competitors to the U.S., including Russia and China, have many state-run companies with U.S. subsidiaries that make corporate donations to U.S. political elections with little incentive to enhance the well-being of Americans.

Much can be done to reduce the influence of corporations on a local level, such as publicly-funded elections, campaign contribution limits for direct donations and better transparency. Represent.Us San Diego is working on those issues here at home, but local solutions will not reduce corporate contributions at the federal level.

The only way to make our elections truly democratic is to pass a constitutional amendment nullifying the past Supreme Court decisions that have created the current situation, or for the Supreme Court to overturn its previous decisions. The current Supreme Court shows no interest in overturning corporate personhood or allowing campaign finance limits, and since justices serve until they retire or die, we cannot expect them to fix this issue.

A constitutional amendment requires the support of two-thirds of Congress, followed by ratification by three-quarters of the state legislatures. Eliminating corporate personhood and unlimited political donations is extremely popular with the American public—more than two-thirds of Republicans and 85% of Democrats support these goals, according to a 2018 study conducted by Voice of the People.

With such broad public support, a political mandate exists to reform our broken democracy. We must put intense political pressure on those in power to achieve this goal. It is not an easy task, but it is necessary if we are to reclaim our democracy by the people and for the people.

Cynara Velazquez is the Director of the Alliance for Community Engagement, a San Diego based non-profit dedicated to increasing voter awareness and civic engagement.
View all posts
Tags:anti-corruptioncampaign financedemocracy dollarsdemocracy reformgrassroots activismpolitical reform

1 thought on “How Corporate Money Hurts Our Democracy”