History of Represent Us in San Diego & the Nation 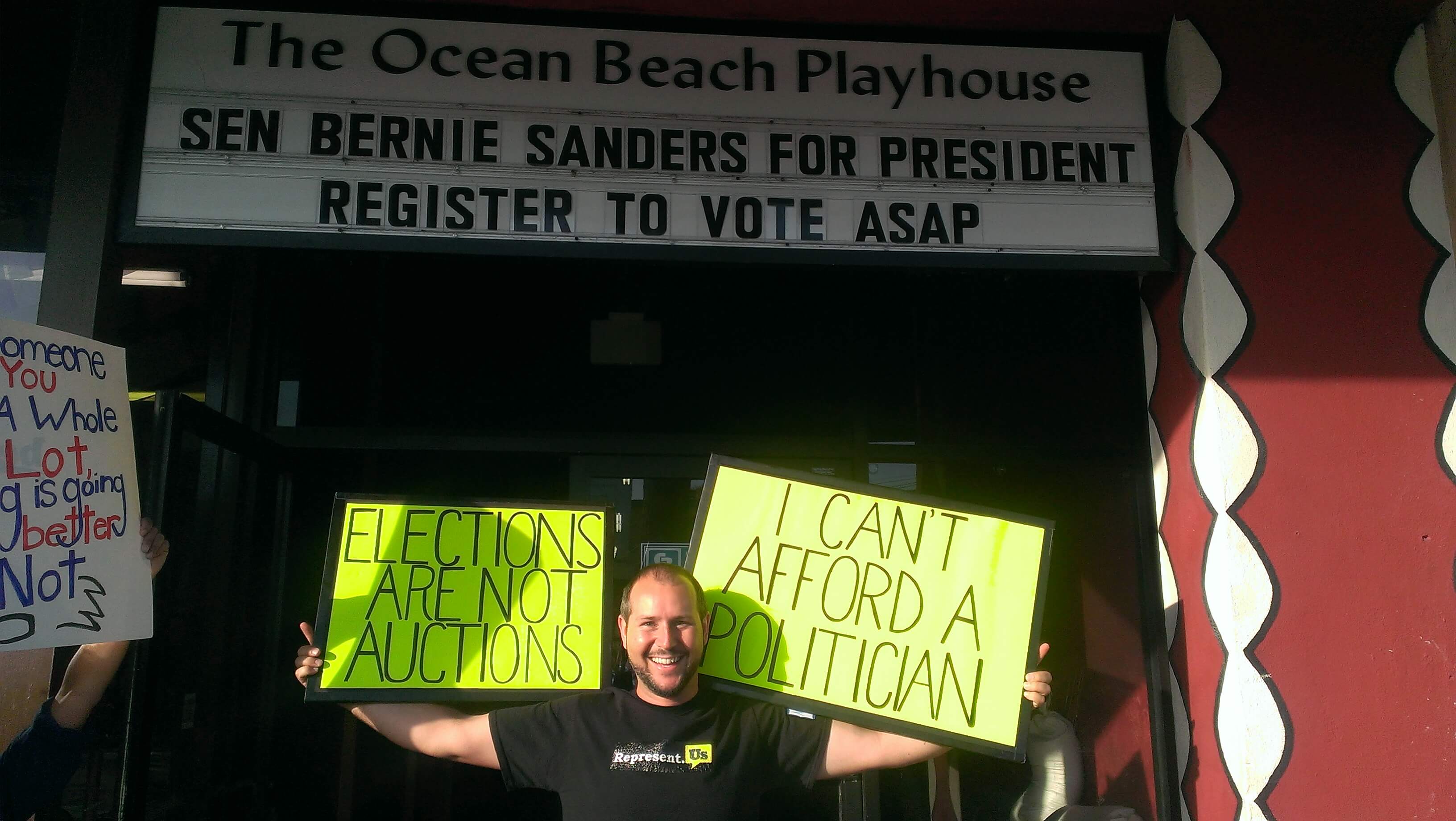 I started following Represent.Us back in 2011 when the AACA (American Anti-Corruption Act) was made public on a website called anticorruptionact.org. It was just one of many organizations like movetoamend.org that took the angle of creating a constitutional amendment to close corruption loopholes in the government. The founders knew if it would be introduced to congress as a bill, it would either be ignored to death, poked full of holes or stapled to something so disastrous no one would ever want to pass it. By calling for a constitutional amendment, history the founders thought this would bypass this problem but quickly realized this was a bit too ambitious and unrealistic. However, people began signing up as citizen co-sponsors of the proposed legislation anyhow (I being one of them). It was in the wake up the Citizen’s United supreme court decision which made corporations into people and money into a form of speech. This allowed corporations and their lobbyists to influence politicians even more than before. Super PAC’s were born and large bribes in the form of donations began to pour in. The organization that grew up around the AACA came to be known as getmoneyout.com.

This is where I come in, circa the birth of Occupy San Diego…

This was the beginning of my active involvement with this movement. I would pass out fliers for getmoneyout.com with movetoamend.org on there too, talk to anyone who would listen and post desparate/frustrated posts on Facebook constantly (probably lost a lot of friends that way). I felt like I was shouting at the top of my lungs “Wake Up Everyone! The game is rigged and we gotta do something about it!”

Then I slowly began to see a type of greed manifest in me that caught me complete surprise: I would never be satisfied with anything that I would accomplish with Occupy San Diego or my activism. No amount of change would quench my thirst for reform. Everything just seemed so broken! So I retreated back to Deer Park Monastery and doubled down on my meditation practice to get to the bottom of this. What I found was anger, frustration and despair… and when I dug deeper, I found an ocean of love and peace. All that I was trying to do was inspired by a deep desire for peace, tranquility and well-being for all. With my new-found focus and no longer driven by my fear, I was ready to dive back into my activism. I began by doing “meditation teach-ins” at Occupy San Diego. Then I invited the Occupy San Diego peeps to join the meditation communities I was a part of (including Wake Up San Diego and Open Heart Sangha) in doing a walking meditation around the Occupy San Diego site. I wanted to bring the peace and love that was inspiring my activism into Occupy and share it with everyone so we could truly lead a non-violent revolution. As Thich Nhat Hanh says, “Peace in oneself, peace in the world” and “There is no way to peace, peace is the way.”

By this time getmoneyout.com had merged with United Republic, and they birthed the Represent.Us movement. This was a whole new platform. No longer was there a narrow focus on a constitutional amendment, the movement saw what the Marijuana Legalization and Gay Marriage movements had done to be so successful… and decided to copy it. Starting grassroots, city by city bringing resolutions, referendums and initiatives to the table to bypass the political structure and go straight to the voters. With cities like Tallahasee Florida passing a local anti-corruption act by the voters, state initiatives aren’t too far away! When more states follow, then a federal anti-corruption act can follow in toe.

Consequently, my Facebook posts calmed down and I began to post more skillfully. I began to try to get organized with Represent.Us people in the area. I formed the “Represent San Diego” Facebook Page and group in Jan. 2015. In April someone named Chris Main (who was living in Oceanside, CA) contacted me through the website and suggested merging the two FB pages (Represent San Diego and Represent North County) and joining forces. By May 2015 we had already begun making signs and organizing rally’s to raise awareness of Represent.Us in Encinitas/Oceanside, CA: 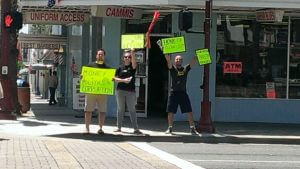 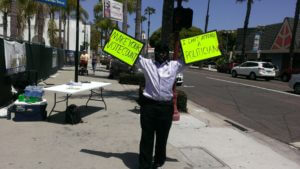 We didn’t gain too much traction, but the ball was rolling. Then Chris Main moved away and I tried to carry on the momentum but I definitely felt like the wind under the sail had disappeared. Chris put me in touch with Sasha and we tried our best as a duo.

In August 2015 we were contacted through the FB page by another person inspired by Represent.Us and we all met at a Bernie Sanders Rally in Los Angeles to hand out flyers and raise awareness. We did rather well and even discovered the local LA chapter in formation. 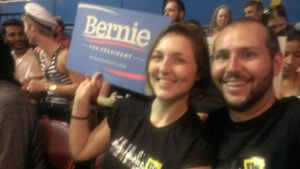 Things fizzled out a bit after that until Emilio contacted me, and that’s when the fireworks really started. I felt like all the patience and momentum finally started paying off. We began meeting weekly, discussing larger events, joining national conference calls with Represent.Us organizers, making this website, going to more events to find allies, making T-shirts/business cards/flyers/banners and whatever else we would need to get out the word.

We began moving full steam ahead with the target of:

Sadly, we burnt out again and the chapter fizzled out August 2016.

Most recently, Aisha Naseem contacted me to put me in touch with Emily Knight. Emily and I spoke for the first time 10/24/17 to discuss the reformation of the chapter and what we have been up to over the past several years. She brings a lot of excitement, commitment and leadership to the table, and I’m so excited to be working on this project again with her!

If you’re stoked about what we’re doing too and want to help, please contact us and see what you can do to stoke our flame 🙂 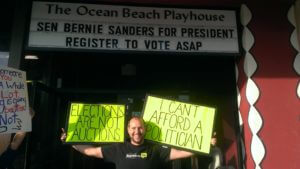 Nick was born and raised in San Diego, CA. He has been politically active since around 2010 and is deeply inspired to share Represent.Us with the American Public. He currently lives in Prague, Czech Republic, Europe and is remotely volunteering for the San Diego Represent Us chapter as the social media coordinator.
View all posts