Does your political party matter? 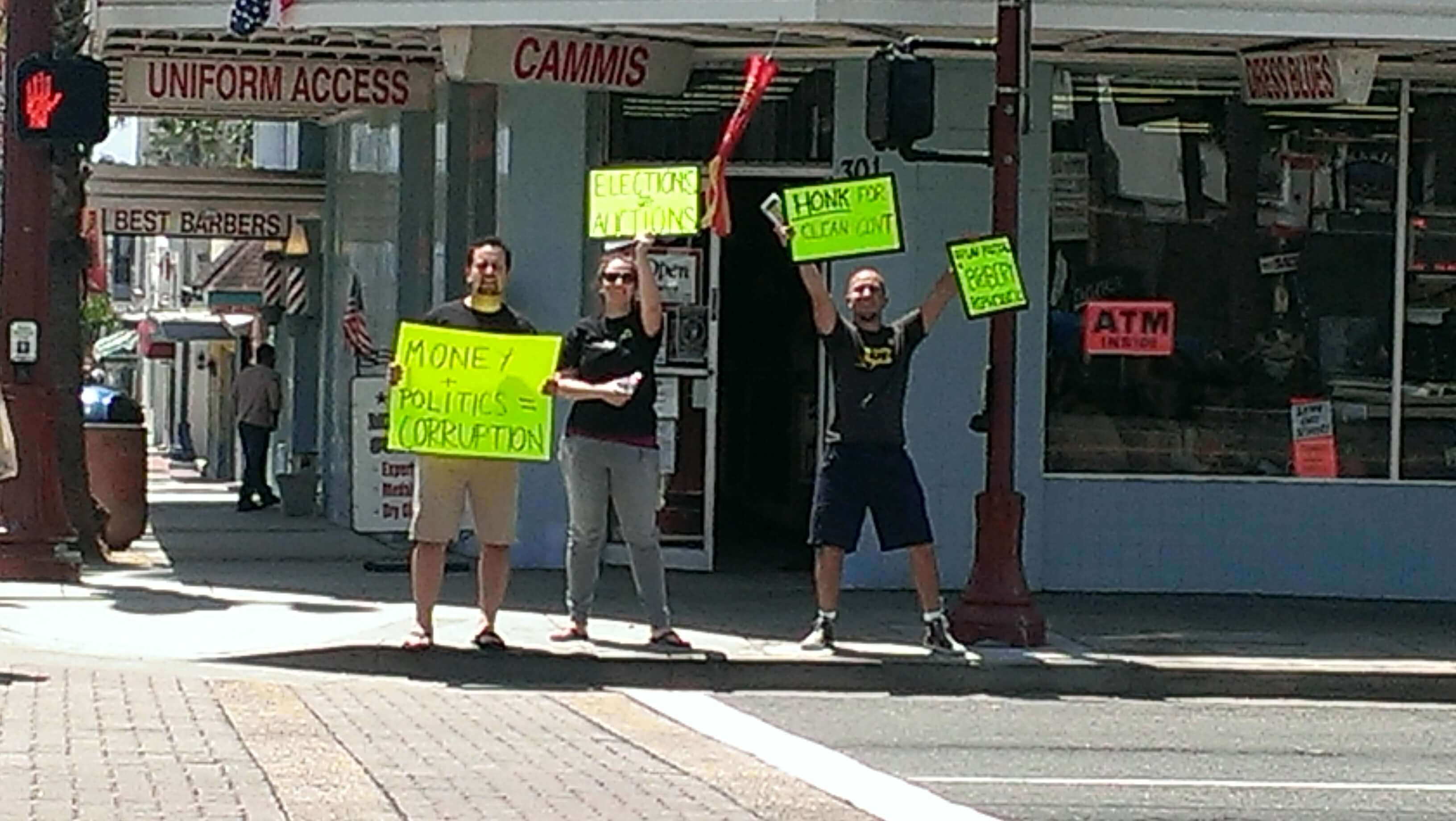 There are few political issues that everyone pretty much agrees on, it just so happens that corruption is one of them. For years now, Represent Us has been there for all those people who want to curb corruption. They hold a huge flag for us all to rally behind and continue to breathe air into the flame of this movement. Just when it seemed like the country was a lost cause and that there was nothing one person could do to stop it, they were a beacon in the dark night.

I found this movement early on, in a pool of hopelessness, anger and despair. I watched it grow from getmoneyout.com, to United Republic and finally to Represent Us. While the movement changed and grew the chapter here in San Diego sparked up and fizzled out a couple times. However, right now, we are on fire here in San Diego! We have a strong leadership core and we have been meeting consistently for over a year now.

Our strong leadership core Representing Us here in San Diego!

Since the latest core group emerged, I have been nominated to be the social media coordinator since I now live in Europe and it was really the only job I could do overseas. It’s probably also because it is really the only thing I have done consistently since setting up the website, facebook group and page. I began by joining all the political groups in San Diego that I could which have the most members regardless of their party affiliation or my own. At first people in the groups were skeptical that our group was truly non-partisan because of my own political leanings on my personal wall. I assured them that what I believed doesn’t affect our ability to work together in this movement. Some were still apprehensive. However, over time, I have seem to have won them over with my consistency on this point.

It’s truly quite remarkable to post an event about weeding out corruption on all these diverse political groups and get support from all of them. Every time a libertarian shares the monthly event link, a Democrat likes a post or a Republican comments on one… I know it means that our cause is just, strong and supported by all. This gives me a lot of hope in the success of our campaign.

So of course being a part of a political party matters, it strengthens our movement when you bring your ideas to the table on how to make this this work for everyone. We are working side by side, together, united to fight for our country despite of differing political ideologies. At a time when the government and country seems more divided since the civil war, this is truly a reason to celebrate!

It might be brought up that certain political parties are blocking or slowing the progress, but the good news is that it really doesn’t matter what one party does in any of the branches of government. No party is as powerful as a united population against corruption. We continue to win town after town, city after city, county after county and state after state. We are like a meteor aimed at the planet of corruption. You can try to shoot at us, but even if you break off a piece, we are still going to fall to the ground. It’s only a matter of time before people learn of the movement and what it stands for. It’s only a matter of time before we succeed.

Obviously there are some out there that want the system to stay gridlocked and divided in order to maintain power or control. This is the war strategy of divide and conquer. I doubt if you are reading this that you are part of that group, but if you are, know that we don’t want to steal your power, wealth or control. Most of us don’t want that difficult burden. All we want is a system that works as it is supposed to—to allow for the people to be represented by it’s leaders. That really isn’t much to ask for and it really is a hard thing to disagree about.

So join us! We have monthly meetings to move this ideal here in San Diego forward. The more the merrier. Bring your ideas, bring your morals, bring your ethics and bring your passion. We might disagree about your opinion on how things should run after we succeed, but I think we can both agree that we should be able to be heard.

Nick was born and raised in San Diego, CA. He has been politically active since around 2010 and is deeply inspired to share Represent.Us with the American Public. He currently lives in Prague, Czech Republic, Europe and is remotely volunteering for the San Diego Represent Us chapter as the social media coordinator.
View all posts